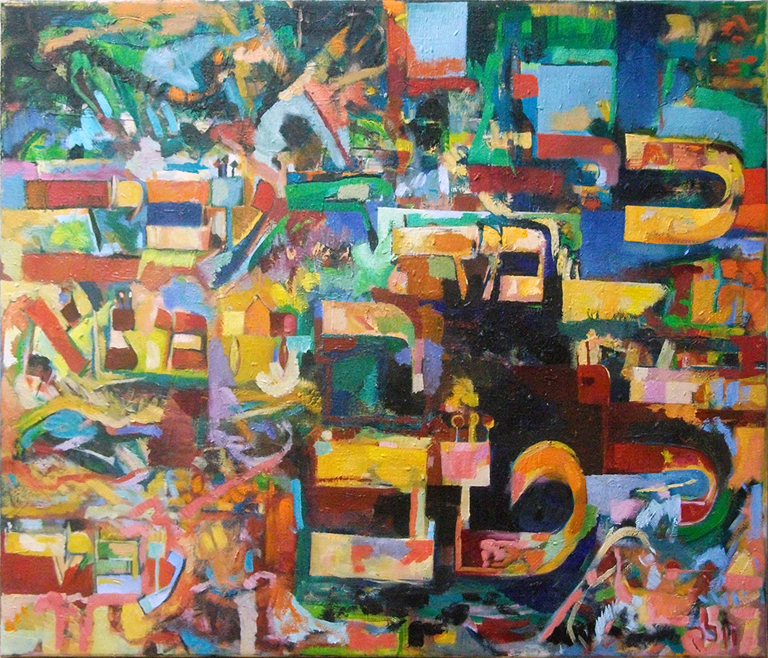 Belief in self. In the process of artwork. That I can recognize the movements of my life. The experiences that I have passed. That is: creating, painting, I call up memories of these moments. Each one as it appears before me. (for each new change that occurs in the painting calls up a new memory. I find each new stroke modifies the memory. In essence. That is—it changes the reality of the past-present-future. It corrects it. (if one merits).) for each new image that appears before the artist who is standing and creating his artwork (and every person—who is standing facing the image of the the past-present-future which appears before him at each moment) is asking to be judged—is portraying the artist’s (person’s) judgment before him and (Hashem, Yisborach) is asking him, giving him the opportunity , to correct it, to mitigate the judgment.

Depending upon the merit of the artist, person, and of his desire to correct his ways before Hashem, and of his desire to see the truth of what is set before him, and of his willingness to work hard and to sacrifice for the sake of meriting to see more truth, for the sake of meriting to see more of what he needs to correct, to that extent he will find it easier or harder to merit to walk towards greater and deeper and fuller truth, to get closer to ultimate truth, to Hashem, Yisborach, in his path in life, or to continue to dodge the challenge that Hashem puts before him, and to drift further and further from the truth, to entangle himself deeper and deeper in webs of self-delusion.

Because, in truth, everything comes before a person by Providence, and with awesome compassion, for his immediate and ultimate absolute good.

But the man, for his part, has the free choice to recognize this kindness, this opportunity that every event in his life presents to him.

The wise one will understand that certainly everything is coming from the All-Merciful and will seek to amass Torah knowledge in order to learn how to serve and appease Him. He will seek to learn how to see beneath the surface of events to find the personal message within them, which is designated specifically for him to further him on his good path. He will seek to take possession of the understanding of the constriction of Divine flow in his direction, the lack of his ability to receive from Hashem that which he desires, as a result of his own uncorrected actions.

All is set before the man in compassion and love, for him to take up the initiative to begin anew to work to correct, to lift the sparks of holiness which he, himself cast into the realm of impurity, and to elevate them again.

All that Hashem does He does for good.