Building upon a solid classical foundation in drawing and painting, his work began to become more abstract and personal as he focused all his energies on developing his artistic response to the contemporary world.

In 1986, Wolk moved to Israel where he began studying and practicing Torah. He married, raised a family, immersed himself in Talmud, and became a scribe specializing in very high-quality tefillin parchments.

In 2006 he returned to the art studio, emerging with the works that he now presents to the public. This unique work has been highly acclaimed by critics. He also has written extensively on the subject of Torah and art, to explain the significance and meaning of his work. 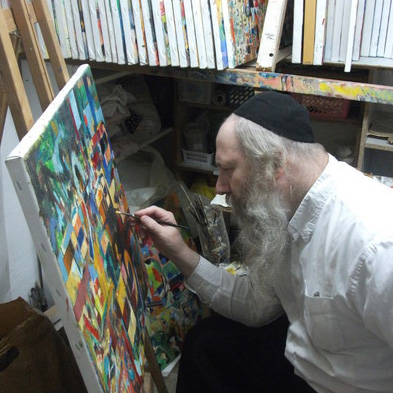 “I produce paintings and drawings which have as their end not principally aesthetic enjoyment, rather spiritual illumination. They are works produced with the intention of elucidating the life of what I strive to be—an eved Hashem, a servant of The Holy One, Blessed is He.” 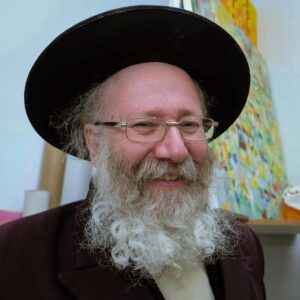 Wolk’s initial impetus to become an artist emanated from the cognition that the creation of art pieces held the potential for expressing very deep and primary truths about a person in particular and humanity in general.

Paradoxically, although art embraces the very most superficial aspects of our reality–the external appearance of the world–nevertheless, it holds seemingly unlimited potential for expressing seemingly endless depths of truth.

Wolk grew to learn that the ability to exploit this potential was tied up with the artist’s desire and willingness to exploit the pure components of his trade alone, namely: line, tone and color, and to wean himself of his desire to relate to the world through his pictures in conventional and superficial ways.

Thus the artist must involve himself in developing his own personal language in form and color to express the extent to which he is able to reach into the truths of his being, which are only in the depths and only found with much labor.

Wolk’s artwork is all about inner life, inspired by the Torah. Thus his works are “compositions”—because their main structure is their grappling with organizing spiritual life.

While he finds “nature” extraordinarily beautiful and inspiring, Wolk does not paint external realities. Wolk proceeded to abstraction because he saw that the organization of the picture was more essentially the issue of painting; that to create a coherent vivid image from “imagination” was a much greater and more profound task than naturalistic painting.

Entrance into the realm of the imagination, the expression of pure feeling and intuition, can be likened to setting sail in a great ocean. One can only successfully navigate the waters with a great ship.

This ship is called “da’as”–understanding or knowledge [Torah].

“As I had decided to ‘go out to sea,’ to reach the distance shore towards which artists strive, I was made vitally aware of the insufficiency of my boat. In His great kindness, G-d led me to His Torah. Twenty years later, after immersing and anchoring myself completely in the learning and practice of Torah, I saw that I was ready to set sail.”