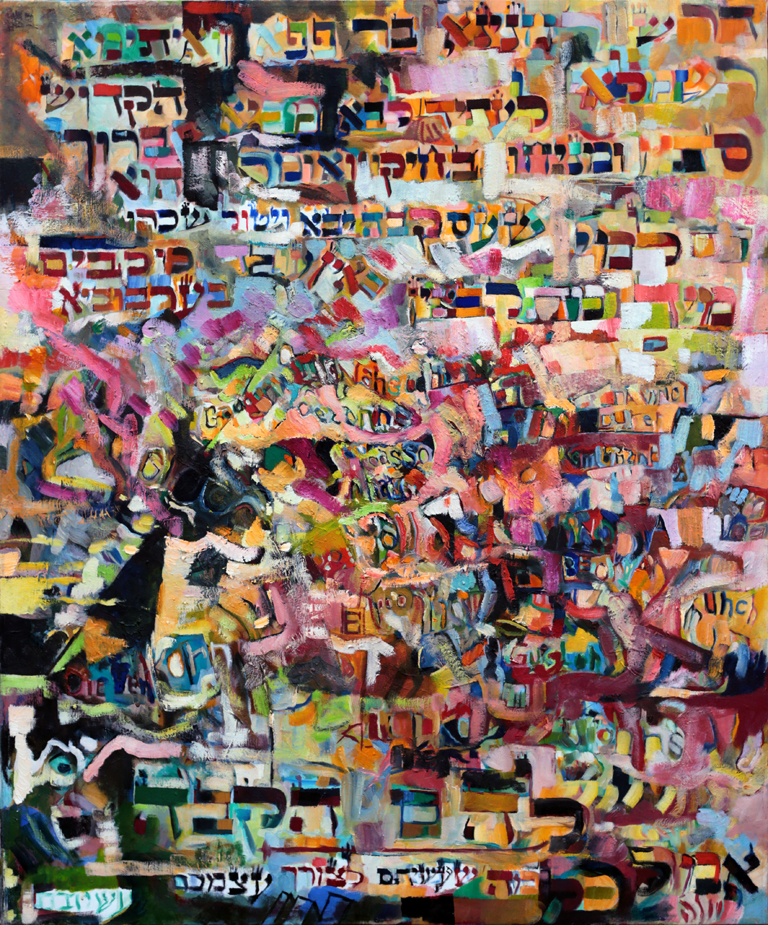 One certainly must wonder: one looks at a painting of DeKooning, of Rothko, of Pollack, of Guston. They are all (and Still, Hoffman, Newman,…) obviously struggling deeply with themselves and their world, and laboriously translating their understanding onto the flat canvas, again wrestling tirelessly with the contradiction of image and paint, that is: form (apparent) and matter (real), that is: illusionary depth and illusory sense of movement and rhythm, stemming from deep emotional involvement, and a cohesion of painter and painting, a deep unspeakable dialogue which penetrates to the essence of consciousness itself, and conscience, every emotion, every thought, again, with the possibility of moments of unity between actor and medium that reach an apex such that thought itself, emotion itself, can nearly be expressed, and preserved there on the canvas, and with all this—the contradiction never vanished; it is only paint on canvas, no life, no movement, no depth, that is, they plumbed, certainly, devoted their whole being to the clash between truth and falsehood penetrating the heart of the question, what is reality? 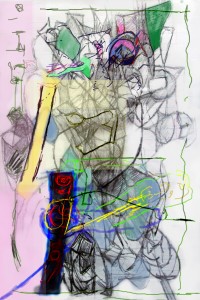 Considering so, one is certainly given to wonder, How can it be that not one of them “became religious” as people say, or in scholarly language: discovered the truth, actually? How could they not come to recognize the A-mighty Creator? And don’t say who knows that they were not private worshippers of the true living G-d. Our sages already tell us: an ignoramous doesn’t fear sin and an am ha’aretz is not pious. If they truly recognized Hashem they certainly would have come to practice His precepts. It seems a big question, but I am forced into only one conclusion.

This work is ultimately shallow. Impossible to believe. For all their genius and greatness of spirit and with their expressed purpose to strip art of its pretenses they still didn’t grasp the truth. They didn’t merit seeing the light. They didn’t plunge deeply enough, or became sidetracked in their search, or something similar. If so, they remain, “a shop-window for the evil inclination” in the words of HaRav Dessler, ztz”l, they exhibit the great storm and tempest of existence—but not really. Not really. They remain a fake. They didn’t make tsheuvah. 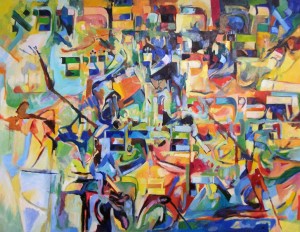 Avraham Avinu searched for truth and found it. They didn’t. In other words they didn’t really search for truth. Or they searched for truth and settled for less, probably art, they settled for art which is, as its name implies, artifice, in other words falsehood. Such a waste; to search for fire and settle for water. How can it be? Testimony to the extraordinary “genius” of the Creator, Blessed is He that made the challenge of man the ultimate challenge, nothing less, and put him in a world where the lure of falsehood is so great that it remains unfathomable even to some of the apparent great warriors for truth and goodness, let us say. And their goal escapes them entirely. Fortunate is one who stops and ponders this truth I am saying here. What a nora world the Creator made! What a life! All this struggle and you end up with nothing at all!?! Miss the boat entirely!?! It’s not fair.

[I am inclined to mediate these words and invoke compassion; for certainly, the Creator does not hold back reward for every small movement that a human directs himself toward Him, and it seems most likely that there was much true meditation and search for truth on the part of these and other artists; and in any case, I did not set our here to judge them; rather my intent here, was to try to understand, that which is still puzzling to me, how that a searcher of truth would not find his goal if his serach was indeed sincere? I am essentially left with my initial conclusion, yet I wished to mediate my words if they sounded harsh, as if I am incompassionate to the difficulites of reaching the truth. I have sympathy, for this life is certainly hard and the diffiulties and barriers toward the truth great and many. So I ask for Hashem’s mercy for all those who would set out to seek Him, to let them find Him. And for those who merit to mount the strength to overcome the powerful lure of falsehood, let them see these examples as testimony of the great obstacles that they meritied to overcome, that they didn’t let themselves be deceived.] 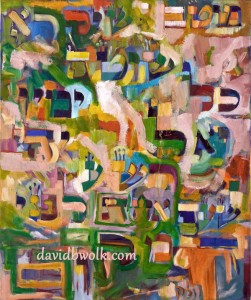 [I am aroused to write an adjunct to the above words by something I saw written on Mark Rothko, examining the question of whether he was a person of faith; the words were entirely speculation and not important, but I saw that abounded there ideas of ‘secular spirituality’, Hashem Yerachem, and this subject seems important for me to address, because I know that we live in a time of rampant epikorsus and heresy, the degree of which has never existed from the beginning of this world until now, and if it be in my power to weaken this curse to any degree I would and will spend my every breath to do so…so as I find myself working and writing in the basin of ‘art’ so I will speak in this area. Secular spirituality is nothing more than pure avodah zara; for Hashem, Yisborach created everything with it’s exact opposite, and just as there is service of Hashem, Yisborach, with tefillot and learning Torah and the doing of His mitzvoth; also so, in the realm of the klipah there is worship and prayer and learning and teaching and the doing of many various actions all in worship and towards the end of building up the kindom of falsehood and teumah. There are also various sects and factions and disputes and theses and theory of how best to serve and promote the secular ends, which path is more pure in it’s pursuit of the false end, etc. Just as in kedushah, there is in teumah.

It is known that art served the avodah zara of the false religion of Europe from approximately 1000 years ago until the period of what is known as the Rennaisance; and from that time and afterwards, it is taught, art rebelled against this false religion and went through various periods of change until our day. It is very important to understand the truth of these changes, whether they represent a movement away from the earlier days of classic idol worship or whether they represent rather a change of clothes, so to speak, but still, are entirely pure in the enlisting of the forces of teumah and sheker. It is also possible that the matters are of differing degrees and it is even possible that there are multiple activites; also the pursuit of emes and also the pusuit of sheker, even in individuals; just as everyone has a yetzer tov and a yetzer harah, and until he masters himself, sometimes he is serving this and sometimes that. 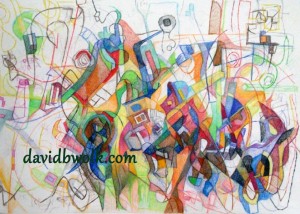 I do not know that I have the insight to distinguish among the differing periods of art, and among differing artists, to which end they directed themselves, towards truth or towards faleshood, but what I can say is that it is entirely possible that certain art can appear very spiritual, and be seemingly motivated by a struggle to distinguish truth from falsehood and good from bad and to choose good and to reject bad; yet in truth, be nothing but an awesome demonstration of the power of sheker which the Holy blessed One imbued into His creation in order to test man with the ultimate challenge in order to reward fully his choice of good. That is, that He provided that there be free and ample opportunity for those who prefer to lie, steal, cheat, deceive, etc. that they should be able to succeed with their goals and prosper in their ways and exhibit to the world that behold; their ways are blessed and hold light, are wholesome and true, the very opposite of the truth. All this, for the sake that the Jew should see and feel the evil and seek to take refuge and connect to his holy neshama and seek the emes and the true good. Indeed it is also for the sake of the Gentile, to choose and reject the evil which poses as good, and to desire to live a righteous life according to the light of the Torah and to live according to the Seven Laws of Benai Noach or even to make gerus if he or she is so moved.

Yes, it is clear that entire movements and epochs of art history, even the whole of art history can be even complete avodah zara; certainly this is possible. (much can and perhaps will be written on this, yet the pure of heart certainly will have already understood.)]

It’s fair. Don’t let yourself be deceived. Don’t. This is the key. Fortunate is the lot of the simple Jew who has his faith intact and struggles for it against all odds. May Hashem in His great mercy spare us all from the lot of those who stray. Amen. 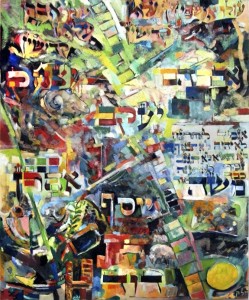