Many of the abstract expressionists, and truly the neo-impressionists before them, particularly Van Gogh and Cezanne, and even earlier, (it seems the source of this change is in the impressionists) already broke away from a certain classical mode in painting that the brushstroke was secondary and subservient to the form being expressed. Previous to this, it is possible to say that the more that the brushstroke was hidden, the better. The emergence to the fore of the visibility of the brushstroke can be seen as exemplifying two new thoughts; one, that the artist’s “voice”, exemplified by his brushstroke, begins to be as important as what he is saying (the form painted), even to the point where the brushstroke itself becomes even the essential form (i.e. Dekooning, Pollack, others). The second idea being an aspect of the general movement towards countering the lie of art; namely, the illusion of depth, by reinforcing the flatness of the picture plane, the surface of the painting; the eminence of the visible brushstroke is also a negation of the lie of painting.

All this is simple to those who know this subject, and here I want to add a point that may not have been said: The brushstroke is an expression of writing as well as painting. That is, the brushstroke forms the bridge between the two. For writing is simply strokes, whereas painting is often involved in delineating ‘areas’, that cannot be defined as strokes which are linear. Areas are expressions of movement in several directions whereas a stroke describes a single direction. Yet when painting emphasizes each individual brushstroke, even though ‘blocks of color’ may still be prominent, areas; nevertheless, each individual direction, described by the brushstroke, is delineated; thus the painting never leaves behind or hides it’s linear aspect. This linear aspect is the bridge to the aspect of writing; that is, line either gravitates towards symbol: letter, or towards describing form: picture. 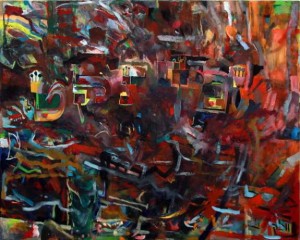 It takes time to learn all of Shas

I have written in another place the matter of the Hebrew letter being a bridge between word and picture, see there; here I wish to postulate that there is a progression in the history of art that is a movement towards this truth; that is, that the movement in art to abolish the lie of painting led to the preeminence of the importance of the brushstroke; this, in itself, being a revelation of the bridge between art and writing, art and letter, art and word. This is apparent also in other modern movements, as is well known (Jasper Johns, and other ‘pop-artists’ seemed to occupy themselves with this idea, and until our day it had entered into the realm of common culture, behold; graffiti in itself and graffiti art, and the entire advertising medium is saturated with this underlying concept.)

In truth, it is hard to define this as a new revelation; likely one will find through the history of man a more or less open avenue between art and letter, or, perhaps an oscillation in history between an opening and closing of this avenue. Also in Jewish history, as well as, lehavdil, the religions of the other nations, we find illustrated manuscripts, and Megillot and Cetubot,where letter flows into decoration and into picture; it seems that these ‘art’ forms implicitly accepted the connection between art and letter. In modern times the nouveau-art movement exploited this idea and expanded it’s boundaries even into architecture; the underlying idea seemingly the inner connection between ‘art and life’, between ‘natural’ and man-made form; this dissolving of boundaries being one of the major preoccupations of the modern art movements. The movement towards abstraction and the preeminence of the brushstroke is, additionally, an exploration of the connection between symbol and the inner processes of the artist, verifying the importance of inner life and form and exploring the connection of inner forms to universal form. The final step of this awareness is the acceptance by the world of the truth of the primacy of the forms of the Holy alphabet, as I have expounded upon in other places. 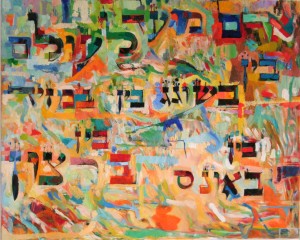 A person is always accountable, whether (he damages) accidentally, intentionally, beyond his control, or willfully.

featured image (at top of page):

May His great Name grow exalted and sanctified in the world which will be renewed and where He will resuscitate the dead, and raise them up to eternal life, and to rebuild the city of Yerushalayim and to complete His Temple within it, and to uproot foreign worship from the earth, and return the service of Heaven to its place, and He will give reign to His Kingship and His Glory in your lifetimes and in your days, and in the lifetimes of the entire Family of Yisrael, swiftly and soon, Now respond, “Amen.”

(Kaddish upon the finishing of a tractate of the Talmud)