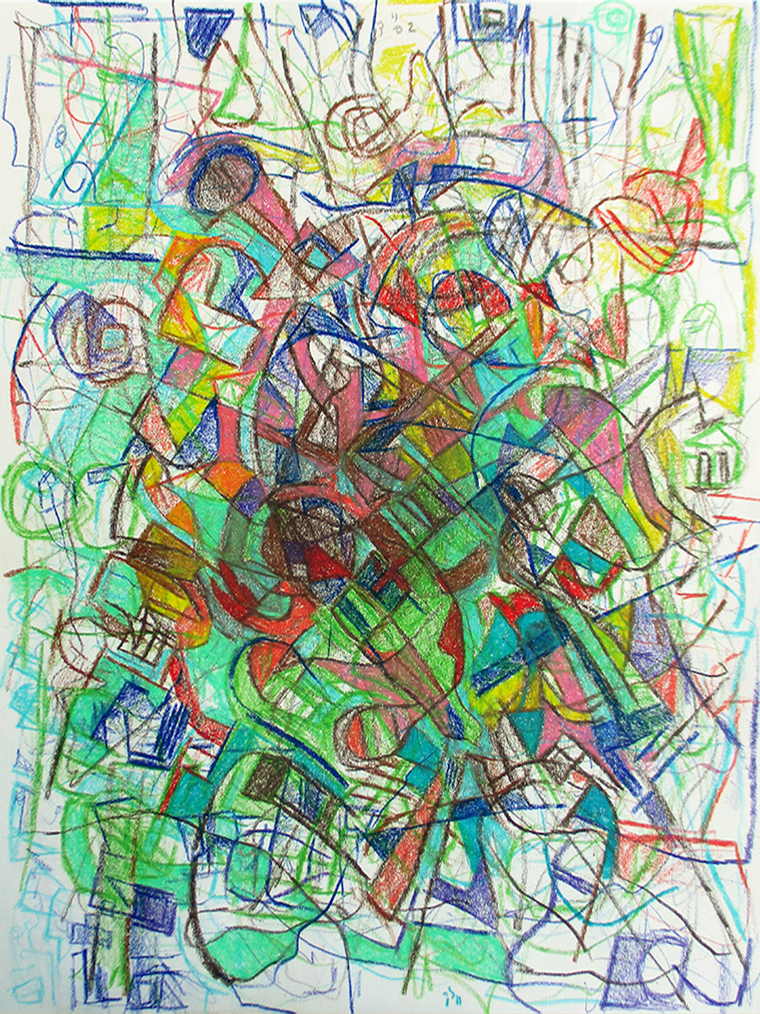 The matter of pictorialization: as much as one pictorializes; that is, uses drawing or painting to represent something external to the picture; a tree, a house, a person, etc.; no matter how well or with what strategies or means the artist uses, the picture remains a representation of that thing outside of the picture. It should be understood well that in such a case the lines and colors and shapes are always lacking, always short of reaching their goal, to portray the desired object, for they are always trying to describe what they are not; that is, the artist uses his tools to reach outside of the realm of their possibility to express fully. Understand this well, for it can be expounded on in very many ways, but it is a very simple point for one who understands.

Yet there is drawing and painting that not lacking anything of truth, that the means exactly describe their subject, in which the colors and forms are not asked to reach outside of their inherent boundaries of expression, rather are asked only to express what they are capable of, and that they express completely and faithfully without compromise, without faltering, and without lack. This is what is known as abstraction, but as one who has understood what I have written here will readily understand, this is a misnomer. For abstraction implies that there is something that was abstracted or generalized or analogized into another form, which is the opposite of what I am speaking about. The ‘art’ that I am describing is only itself, from beginning till the end, it speaks of nothing but itself, contains no allusions.*

(* more correctly, it contains no allusions that are necessary to its essence, for there exists its intrinsic essence and form which is real and in its full potency without any need of support from outside references, it’s full import and message is contained in itself, and is evident in its entirety before the viewer’s eyes. However, the picture have many additional components which are not essential to it, that is; in addition to the integrity and wholeness of the lines and forms and colors which are their own intrinsic message, additionally they may allude and refer, comment and reflect, suggest and indicate many many subsidiary matters without end.

This kind of art may be compared to a bird’s song, whose beauty is its pure combination of sounds as they are emitted from their source, the bird. The song may additionally evoke in the hearing of it different feelings, memories, inspirations, etc. but these are additional and not the essential aspect of the song. Understand this well.

The important distinction between this kind of art and the ‘pictorial’ image making, is that here, the allusions to something ‘other’ are always secondary, non-essential; which is as they should be, since they can never be exact or absolutely true, as they are outside the realm of the medium, of the picture; whereas the true form that appears before our eyes is always absolutely true and complete and ‘enough’ within itself. Which is not the case in ‘representational images’ where the subject is always ‘sought to be expressed’ but remains forever elusive and unachieved, whereas the reality that is before our eyes, that is, the ‘abstract’ aspect of the picture, the arrangement of forms and colors are, at best, only close to expressing the subject of the picture, and most often, almost completely detached from the sought subject. This too can be spoken about at length but one who understands will already understand.)

This form of art, therefore, is perhaps best termed as for what it isn’t. That is, it can be called: ‘non-representational’, that is, it doesn’t seek to represent something other than itself. It is merely itself. Thus who prefers truth to illusion will gravitate towards this. With Hashem’s help, always.