My pictures can be divided into two categories. Representations of statements of our Sages that are more or less well known, and 2) representations of more esoteric statements. And the range between. The inner content of the pictures represents musing upon the subject that is pictured in words, musings that have as their common base—‘Torah thought that are more appropriately expressed in pictorial form than in words’. The depth of this statement is not a subject for this forum [essay]. At a simple level the pictures are a means of making available to a wide public divrei Torah that are otherwise privy to those who have merited to sit in the Bais HaMedrash day and night. And if they are  teachings that are already well known to all, they are a means of communicating the depths of the matter. How so? It is a certainty in my opinion. That what has been put into the picture that is what can be received from it. This is included in the words of our Sages: Matters that come from the heart enter the heart (of the other). My pictures represent a process of a careful consideration of Torah concepts—in particular the concepts that are spelled out in the particular picture. Thus the ‘abstraction’ is a portrayal of the inner essence of the saying. (It needs to be added that the portrayal is one of an unlimited number of possible considerations of the subject.) This is included in our Sages statement: there is no Midrash without a novel idea. In our case, each painting is a fresh and novel understanding of the subject portrayed. In summation my pictures are attempts to render through the inherent means and rules of pictorial expression, a language [discovered and] developed by artists from ancient times until our day–to render a deep understanding of the subject portrayed.

At a deeper level—behold the world is created from the Torah and through the letters of the Torah. In the words of our Sages of blessed memory: The Torah is the blueprint of the universe. Thus being so it onlystands to reason that the pictorial form and structures whose rules and secrets the great artists through history have toiled to uncover, is in itself an emanation of Torah. Indeed the entire creation receives its life, its existence from the Torah. This is a very deep discussion and is not pertinent to this forum except to mention in passing. I mention it in order to dispel the thought that there is an essential disparity between artistic form, in particular “modern” artistic form, and Torah content. Otherwise! There is parity and harmony between them. The prerequisite condition is only the artist’s sincere desire to search out and explicate truth, and not to let the means, that is, pictorial form¸ inherent in which is deception and illusion, dominate the content; rather the opposite: the content which is truth must dominate and subjugate the form to its goals.

There are many other levels to the pictures. Here I have sought to chart its main avenues. 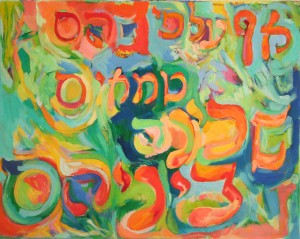 Even though they (Yisrael) are impure, the Divine Presence is among them

There is no place void of Him