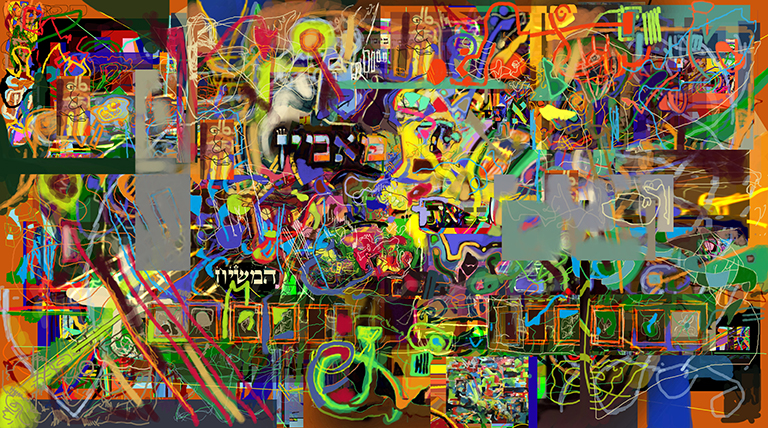 A matter is only understood in its root. For example, one may see a tree that appears as an apple tree, but actually at its root it is a pear tree, only that an apple tree has been grafted onto it. Above, to the eye it is apple, but in truth it is pear.

Thus with false beliefs;there is a true explanation for everything in creation, each fact, its true meaning and purpose. This is what was revealed to man in the holy Torah. Yet many branches of the true tree of Torah have been cut down (and burnt), and in their place have been grafted onto the tree many strange, foreign growths. In turn, these foreign growths, after gaining nourishment from their source, the Tree of true Life, Torah, have been replanted abundantly and sprout all over the world. These strange trees, false beliefs, spread their colorful branches and clamor for attention, inviting all to taste of their fruit and to take shade under their foliage.They pay no homage, nor admit any connection to their source of existence, and the tasting of their fruit naturally only yields poisonous results.

Thus our world is full with every manner of philosophy and doctrine, religion and cult, politic and norm, each with its own unique attraction and charm, seeking to entice and draw near all that it can. Its flowers may be gorgeous, its fruit luscious, the spread of its foliage magnificent, the rustle of the wind through its branches overwhelming in its beauty. How can one not be drawn by the array of glory?

Only in the root can a matter be discerned. If one cares for his soul he will forego the delights to his eyes, to his senses, and search out truth of all that he meets. He will trace every utterance, expression and impression that is received from the world and remove its various kleipot until the kernel of truth within is revealed, until the source of each matter is lay barren and can be seen clearly in its true nature.

This is the Avodah of Benai Adam. To discern false from true, bad from good, idol from G-d. to find the true Tree of Life and to cling to it, nourish from it alone.

See the Rambam, z”l, in the beginning of Hilchot Tsheuvah, that the earlier generations of man were not so audacious in their worshipping of foreign ideas, rather they admitted that G-d was the ultimate power, yet that there were other powers which were entitled to homage. Yet the generations have descended and in our time we find the unique phenomena where Heresy is widespread, that is, there is complete denial of the truth (at least on the face of things) altogether. Heresy is perhaps the most honored doctrine in the world today, where nearly all the Institutions of Higher Learning not only respect such outlooks, rather place it as their headstone and as the foundation upon which all rests.

It can be said that the heretical doctrine finds such popularity in that it extols the seemingly virtuous declaration: I will not admit as truth anything that my eyes cannot testify to, my ears hear, etc., in short, anything unperceivable to the senses. Since the soul is not seen etc. therefore it cannot be accepted, all spirituality is nil; there is only the body, the physical world, molecules, atoms, Evolution and any other theory that can be postulated and accepted by like-minded “enlightened”  human minds.

One must realize how widespread is this phenomena and how its pollen is intermingled into the fabric of our lives and the lives of our children, and how it’s stench threatens to envelop the world and to extinguish the light of truth from the hearts of men altogether. This is called Kleipat Amalek and gains it great potency in that it nourishes from the highest point of Kedusha (see sefer שרביט הזהב/פורים מהרב אברהם צבי קלוגער, שליט”א, פרשת זכור, באריכות)

The only way to “weed Amalek out of our lives” is to uproot the young (hopefully) saplings as they start to grow in our gardens, to spread these poisonous growths on the table, shine the light of truth upon them and expose them in front of our families and friends for what they truly are.

What is at the source of this seemingly innocent philosophy: I don’t admit except what my eyes see, etc. and what is at its feet? If we are just bodies, then I am no different than a cat or a dog or a spider or a worm. I deserve no special respect in that I am your parent or even respect as a human; how am I different than a stone wall? To steal from me, to curse me, to kill me, what should prevent you? Morality? Can morality be seen, heard, felt?

Of course the Modern-Day-Heretic is careful not to murder nor to steal nor curse (in ways that could easily be discerned), but this is only because the Torah is still in the  world (and can never be uprooted from the world), and the philosophy of Amalek can never overtake the world (for as it’s root is in Kedusha this would mean extinguishing itself.) But the pure Amalek ideal, the Heretical Gestalt in its root is thus: no morality at all, no good, no evil.

Thus one must take these seemingly innocent notions that are so abundantly available today and to see where they are coming from and what is their logical conclusions and consequences, and