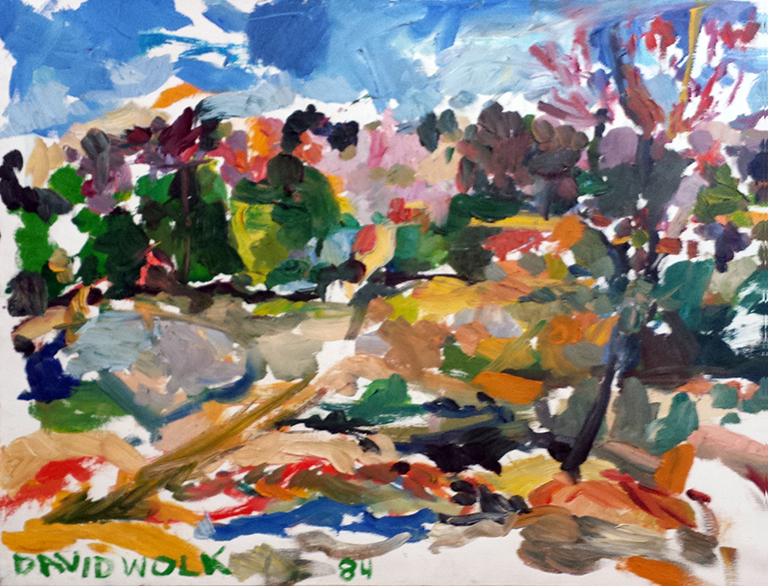 The start of art making for me at least, and likely for most artists, is the desire to picture what one sees with one’s eyes before him; of the natural world, a tree, a mountain, a river, etc. When one starts to the task he encounters the reality that he is facing the Ein Sof, b”h in all that is before him. For the entire Creation manifests the infinite wisdom of Hashem. There is no manner or form of looking at the world that one will not see this, if one is the slightest bit honest.

Thus the artist sees before him at the outset, basically, an impossible task. Any representation (on paper, on canvas) of what is pictured before his eyes, is basically bound to lack all true semblance. Even if one exerts much time and effort, even after one has mastered greatly the movements of his hand in tracing the perception of the eye, and has become expert in the rendering of form, color, etc. he is nevertheless still infinitely far from producing any true semblance of the seen before him. For if the swiftest man were to run with all his strength a thousand years, were he sent in the most awesome spacecraft a thousand light-years towards the end of the universe, would he be any closer to infinity? And how infinitely small is this universe compared to the lowest spiritual world, all the more so to higher spiritual worlds, all the more so the root of the Creation, the first emanation of the wisdom of Hashem. And this wisdom permeates and vitalizes all the Creation, is found in every leaf and the smallest twig, in every droplet of water, etc.

Thus the task is impossible and is to remain impossible. This–any honest perceiver grasps immediately. Yet the world continues to exhort that there are great pictures that have been made, by great artists, and that many will be made; and you, why isn’t your picture beautiful like all the greats?

So the choice is to stay with the truth which is evident beyond contention, or to hearken to the steady onslaught of lies from the mouth of the world, the howling storm of human folly surrounding, wailing, beckoning, threatening to smash through the doors of your heart to capture your being entirely.

You must know that Hashem Yisborach gives you the power to securely remain in your pure heart against all foe.