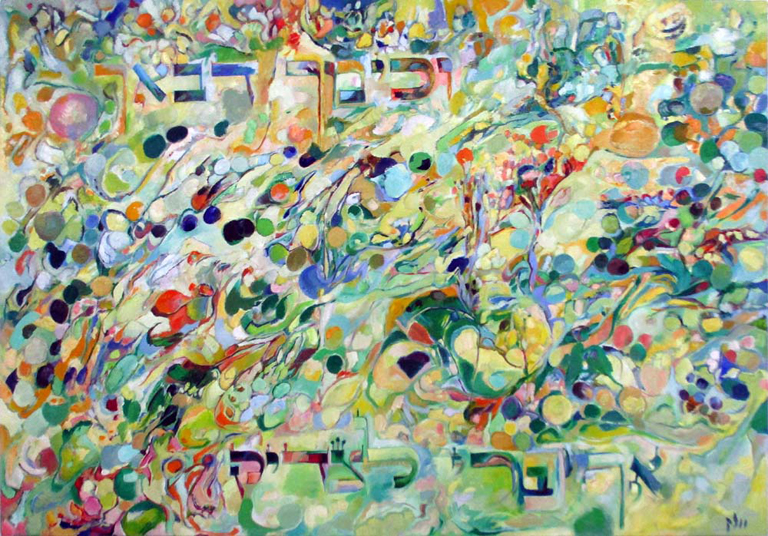 There is reward for the righteous

We discussed that this painting should proceed from two pesukim: וכימיך דבאך, from the blessings of Moshe Rabbenu, a”h, to Shevet Asher and to Clal Yisrael in general; according to the explanation of Rashi, z”l, there that it refers to the blessing of old age, see there; and also the words from the posuk in T’hillim: אך פרי לצדיק. Our intention in this was a specific reference to the event, the celebration of which the painting was designed to contribute, the ninetieth birthday of Reb Moshe Rubin, shlit’a; צ”דיק being of numerical value ninety, and alluding to the quality of his life, which was that of a tzadik, one who clings to Hashem Yisborach and His holy ways in every situation.

When I began the painting I immediately felt strongly that I was being asked to bring out that this is a painting of Gan Eden. The explanation is that Gan Eden is the place of the tzadik in this world and in the next, essentially without distinction. Since the tzadik’s sole ambition is to cling to the ways of Hashem, thus the quality of his life is that of spiritual fruition. This is the meaning of the posuk which the painting seeks to portray, אך פרי לצדיק: the life and deeds of the tsaddik are solely that of bearing fruit, of which he and those whom he touches, and the whole world, enjoy for eternity.

Symbolism in the painting:

The principle motif of the painting is, as alluded to above, fruition. Man, in general, and the tzadik, in particular, is compared to a tree, rooted in fertile soil of Emunah, bearing beautiful fruit which are his good deeds, the offspring of his toil in Torah, in the correction of his character, and living by his Emunah.

Thus various “types of fruit” are pictured in the painting, for the tzadik is not limited to one field of activity, rather contributes and flourishes in all that he engages. Specific species are not delineated in the painting, with the exception of the olive, firstly because if its relation to the blessing of Shevet Asher in the posuk of וכימיך דבאך, (see the explanation of Rashi, z”l, there). The olive is also connected the Spherah Yesod, which pertains to the tzadik, as the posuk says (Mishle 10:25)  וצדיק יסוד עולם ,the tzadik is the foundation of the world. I also had in mind T’hillim, Chapter 128 which describes the blessed life of one who fears Hashem; in particular, posuk 3: אשתך כגפן פריה בירכתי ביתך בניך כשתלי זיתים סביב לשולחנך, Your wife is as a flourishing vine in the innermost parts of your house, your children like olive shoots round about your table.

Yet I was not so particular about other specific fruits. The reasoning behind this is that I my primary interest was the inner processes of the tzadik, the motivation and decision-making that underlies his activities. This is paralleled in the artistic process in which every brushstroke, every change of direction, form, shape and color, is an expression of directed creative energy and decision, for good or for better. Thus the consciousness and conscience of the tzadik, paralleled in the creative process of the artist, is the underlying fabric of the painting. In light of this, my focus was not on representing so much specific fruits, rather depicting flowering and fruition itself, in various stages and forms; from the decay of the seed in the ground, the various stages of growth of the “tree”, the final blossoming of fruit, as well as the opening and sectioning of the fruit, revealing seeds for another generation.

In general, and certainly in this painting, my artistic approach is characterized as מופשטת, stripped of outer-garments, or known commonly as “abstract”. Specific references to the revealed and known forms of this world are left as allusions and not specifically delineated. An understanding of this practice of mine is beyond the scope of this small essay, but it is possible to say in short, that this practice allows for a multiple of meanings to be expressed in a constricted format (This parallels the holy Torah which Hashem revealed to man, in which Hashem’s own sublime wisdom, as it were, is clothed in a small collection of letters and words, each small element containing limitless meanings and teachings.) Thus my paintings are a process and product of enclothing deep thoughts and feelings in “abstract” colors and movements. This also creates a situation where the viewer of the painting is drawn actively into the creative process, for the image finds its completion in the mind and heart of the viewer, who “decodes” the abstract forms according to his own orientation and imagination.